skip to main | skip to sidebar

Test #1:
Location: 4m x 4m white painted room.
Method: Aimed each light at the white ceiling and measured the total reflected light with the light meter fixed in the middle of room. 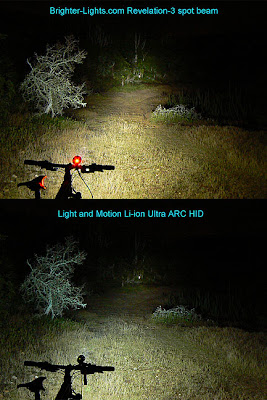 Test #5:
Location: Straight road with riverine forest.
Method: Aimed the center spot of each beam at 60m distance, light meter set up at 20m in middle of road, markers at 40m and 75m.

Overall light, difficult to see detail at 40m to 75m. (see next photo)

Photo below is a cropped version to see more detail from 30 to 75m.
Click for larger version...

From the first moment the 13w HID appeared much dimmer than the Revelation-3 LED.

Both systems weigh about the same, but it's clear that the Revelation-3 LED kills the 13w HID in every respect.
Posted by luxreader at 4:24:00 PM

Since high power LED's became readily available a few years ago, we've seen certain terms used when advertising these LED's and products using these LED's. A typical example is 1 watt or 3 watt Luxeon LED as found in many different lighting products. Other's again, describe their product by mentioning the lumen output.

Describing a LED by means of a watt rating can be misleading and useless. Watt, is the unit used when measuring an amount of electrical power. Electrical power is the result when multiplying voltage with current. So if a device draws a current of 350mA at a voltage of 3.37v, the wattage is 3.37x0.35=1.18watt of power usage.

High power LED's are sorted into different bin groups according to their total light output at a specific current draw, normally 350mA. It is at this power level where manufacturers rate their LED's because it's the level where high power LED's are most efficient. Driving them harder produce more heat and other energy losses. One LED using 3 watts of power can put out 130 lumens, while another LED using 3 watts can put out 180 lumens. Only 2 years ago a LED's with 45 lumens at 350mA were cutting edge. Today we have more than one brand that's rated 115 lumens+ at 350mA. So before getting excited about your 3 watt led light, first find out how many lumens that 3 watt actually put out.

What does lumens mean? One lumen is the equivalent of 1.46 milliwatt (1.46 x 10-3 W) of radiant electromagnetic (EM) power at a frequency of 540 terahertz (540 THz or 5.40 x 1014 Hz). !@#$%! In simple terms: Lumen is a unit of measurement of the amount of brightness that comes from a light source. Does the lumen rating give us an idea of how much light we will see on the trail? The answer is: not really.

The lumen rating gives us a good idea of how bright the light source is, but it really depends on what we do with that light source. A high lumen rating with an inefficient secondary lens or reflector will waste our lumens. It is the same for different beam angles. For the same lumen rating, a light will put out more lux with a narrow beam, than with a wide beam. Why?

Lux is a derived unit based on lumens and is used to measure illuminance or luminous emittance. The difference between the lux and the lumen is that the lux takes into account the area over which the luminous flux is spread. 100 lumens, concentrated into an area of one square metre (narrow spot beam), lights up that square metre with an illuminance of 100 lux. The same 100 lumens, spread out over ten square metres (wide angle beam), produces a dimmer illuminance of only 10 lux.

So what really matters is the amount of lux that your light put out, or the light intensity per square metre.
Posted by luxreader at 9:11:00 AM